A mid-1800s British military percussion carbine, sharing some similarities with a cavalry saddle weapon, this is a nifty piece of kit. The lock bears just the faintest remains of the crown on the left hand side, indicating its British military origin and writing that likely would have displayed where the weapon was made. Light and easy to use in its time, it was possibly used as a sporting gun later in its life, as it bears attractive and professional looking cross hatching where the right hand grips the weapon. There is also evidence of gilding on the top and on the percussion housing. There is a border engraving on the lock but any additional etching has been cleaned off. Ultimately there exists (at least) three possibilities; that it was sold out of service into private ownership and was subsequently decorated as a sporting weapon. That it was never used for sport but was in fact the private purchase of an officer for military use, which is certainly not unprecedented, but perhaps less common. Or, what I personally believe is most likely, that it was converted from a surplus 1853 pattern rifle musket, in Canada around the 1860s. This would have been used by British and Canadian soldiers as a shotgun to hunt for game, whilst serving in the large Canadian wilds, especially where military supply chains were lacking.
The hammer holds in the half cock and full cock position and the internal trigger mechanism still works. The trigger guard and butt plate are made of brass, whilst the rest of the metal parts are steel. It has a half wood, half metal rib to the barrel, with the latter seemingly welded on to provide better housing for the ramrod and sling loop. The barrel features a small bead of steel as a foresight and the number 210 stamped into the top near the lock, although from the brighter colour I believe this to be a later marking. It is 123cm long making it very agile in the hands for a black powder weapon and has a lovely wooden stock with only a little bruising. Unfortunately some overzealous cleaning of the lock has made its life more difficult to piece together, but this carbine teases with you with what was quite likely a well-travelled and storied history. 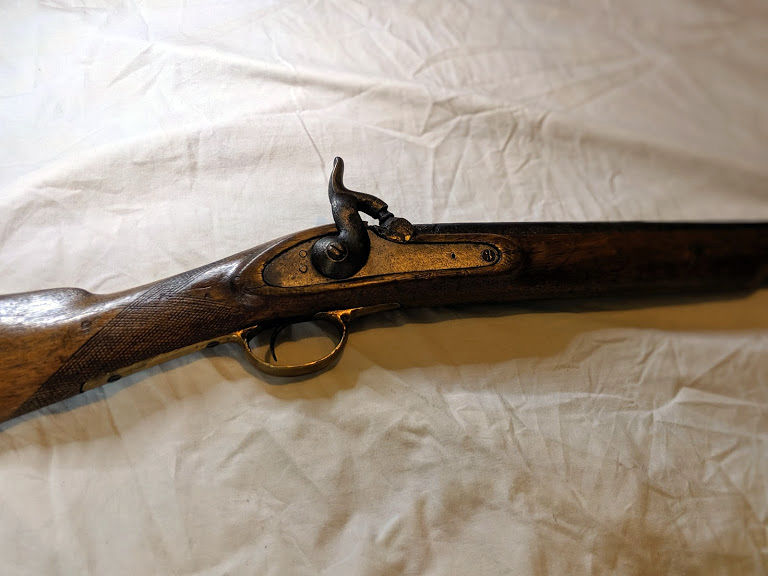 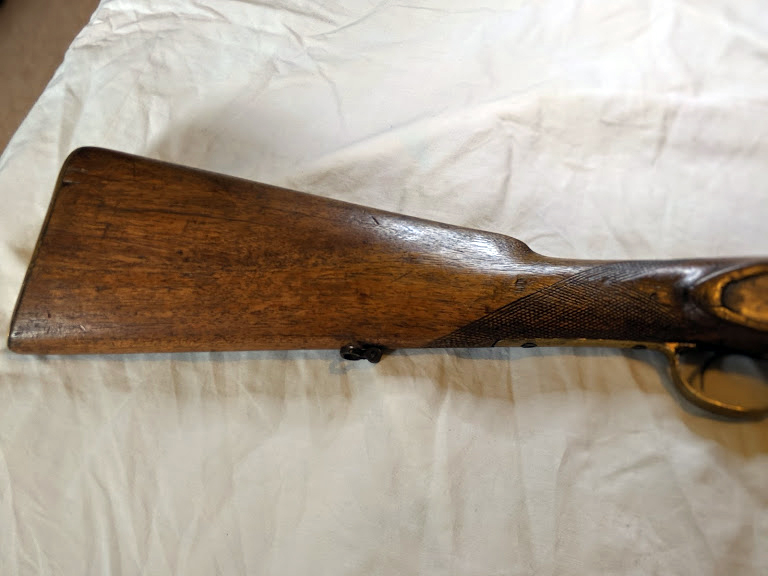